These link in almost every case to Gutenberg, which offers a variety of ebook and download options. In some cases audio files are available. Finnish readers are particularly fortunate--someone has put up many London novels in Finnish!

The Abysmal Brute (1911)
A prize fighter faces the corruption of civilization and finds redemption in the wilds of California.

Adventure (1913)
Located in the Solomon Islands, this devastating portrayal of copra plantation slavery has scholars arguing whether London was criticizing the racism of the colonialists or approving of it.

Before Adam (1907)
The modern narrator's dreams transport him to a prehistoric community. This novel led to media frenzy over charges of plagiarism. Vince Emery found 221 news stories, reviews, advertisements, and letters relating to this "most unfortunate book I ever wrote. See Vince Emery, ed., Jack London's Before Adam Battles. San Francisco: Vince Emery, 2021.

Burning Daylight (1910)
A tale of the Klondike Goldrush and the corrupting influence of high stakes capitalism. One of the "Sonoma County novels." Illustrated.

The Call of the Wild (1903) Audio Book version from LibriVox
The mythopoetic story of Buck, a sledge dog in the Klondike, and his journey of transformation.

The Cruise of the Dazzler (1902)
Escapades of the "Frisco Kid," a gritty and mischievous youth whose quick wit and courage see him through challenge and adventure.

A Daughter of the Snows (1902)
London's first novel introduces the typical strong, independent, well-educated heroine that would run through much of his fiction. 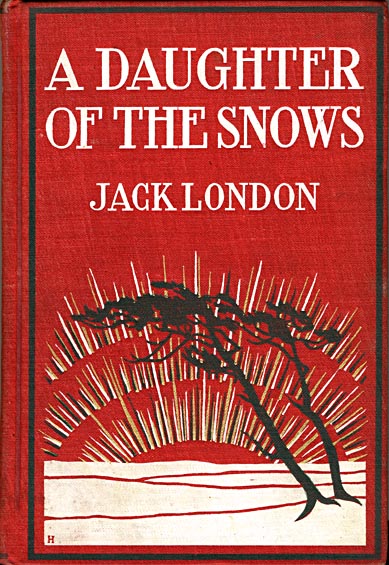 The Game (1905)
This prizefight story is influenced by London's attendance at events to write boxing journalism articles..

Hearts of Three (1918)
Originally intended as a film scenario, this plot is an improbably adventure story that can't help but bring to mind the "Lost Ark" films of decades later.

Jerry of the Islands (1917)
Jerry is a dog whose experiences reflect the cruelty and racism of colonial Melanesia. Does London support the racism or not?

The Kempton-Wace Letters (1903) With Anna Strunsky
A epistolary novel, the only one London wrote with another. Strunsky wrote the letters of Dane Kempton, who presents a romantic view of love, disputed by London in the form of Herbert Wace. After meeting Charmian Kittredge, London admitted he now agreed with Strunsky's romanticism.

The Little Lady of the Big House (1916)
A triangle romance provides the basis for a questioning of the meaning of masculinity, as well as an examination of agribusiness in California.

Michael, Brother of Jerry (1917)
This story of brutality toward animals inspired a movement known as the Jack London Clubs, which were devoted to the cause of animal welfare and humane treatment.

The Mutiny of the Elsinore (1914)
Written during a time of personal tragedy, this novel of sea life is among his weakest.

The Sea Wolf(1904)
Chronicles the voyages of a ship run by the ruthless Wolf Larsen, among the greatest of London's characters, and a spokesman for an extreme individualism London intended to critique.

The Star Rover(1915)
The great transmigration novel inspired by the experiences of an ex-prisoner's account of coping with "the Jacket," a form of torture at San Quentin. London was a lifelong supporter of humane prison practices and helped parolees with money and sometimes jobs.

The Valley of the Moon (1913)
The first part of this novel exposes the struggles of the working-class of London's day, while the latter part is an exploration of the California landscape, with Sonoma Valley providing the "perfect spot" for the wandering lovers.

White Fang (1906)
An initiation story concerning the taming of a wild dog in the Klondike. London joked this was his Call of the Tame.